Today is the first of several reviews of whiskies that we sampled as part of our North Texas Spirits Society (NTSS) Blind Tasting (click here for the full list). This particular bottle is a single cask release of a whisky produced by the Royal Brackla distillery and bottled by the Scotch Malt Whisky Society (SMWS).

Royal Brackla is one of only three Scottish distilleries to have been granted a Royal Warrant, the others being Royal Lochnagar (still open) and Glenury Royal, which is now closed and demolished. Brackla was granted its Royal Warrant in 1833 by King WIlliam IV.

Founded in 1812 by Captain William Fraser of Brackla, the distillery is located on the estate of Cawdor Castle in Inverness-shire. Given its location, there is some debate as to whether this is a Speyside or a Highlands distillery, but both the Malt Maniacs and the Malt Whisky Yearbook identify it as a Northern Highlands distillery, so that is how I will categorize it, as well.

The Royal Brackla distillery remained in the Fraser family for more than 100 years until it was sold in 1919 to John Mitchel and James Leith, who subsequently sold it in 1926 John Bisset & Co Ltd of Leith. In 1943 Bisset & Co was taken over by the Distillers Company Ltd (DCL).

The distillery was closed for two years, 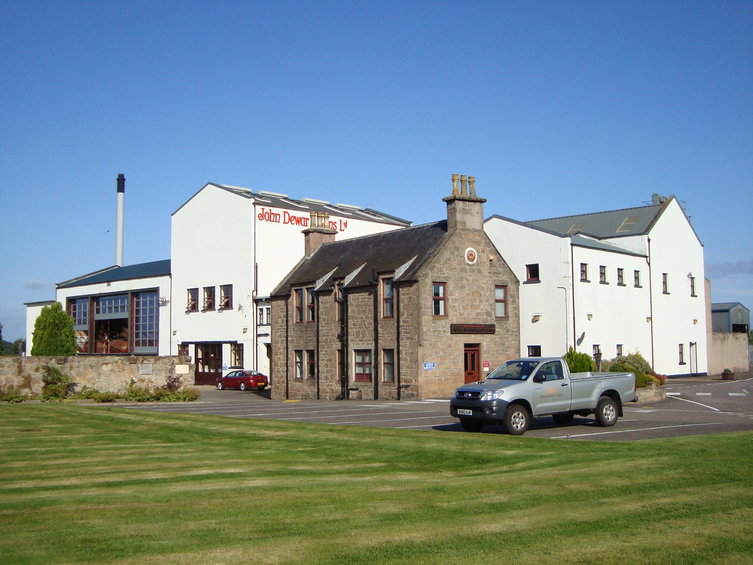 from 1964 to 1966, for a substantial renovation and expansion project. During this renovation, the stills were changed from the traditional coal-firing to internal heating by steam generated from a coal-fired boiler.

When Grand Metropolitan and Guinness merged to become Diageo in 1998, Royal Brackla was part of a mandatory divestment of distilleries to prevent Diageo from having too much control over the whisky industry. Ultimately, Royal Brackla was part of a group of products and distilleries that were sold off to John Dewars & Sons which is, in turn, owned by Bacardi, who still owns the distillery.

Royal Brackla is not widely released as a single malt, although there are a number of independent bottlings available. According to the 2015 Malt Whisky Yearbook there are discussions about expanding the number of official releases.

While the distillery may be relatively unknown as a single malt, it actually played a rather significant role in one of the biggest shifts in the whisky industry, namely the development of blended whisky. Andrew Usher, who joined the company in the 1860’s, began blending various whiskies, using Brackla malt whisky for some of the very first blends. The use of Royal Brackla for blending continues to this day with much of the whisky produced at Royal Brackla used in the Dewars blends, naturally, as well as being a component of Johnnie Walker Gold Label.

Now, before we get to the tasting notes, remember that this was tasted “blind” meaning we had no idea what it was until after we had nosed and tasted the whisky. Some of my notes in the next few reviews will include some of the “guesses” I made about the whiskies during the tasting period. I figured I would leave them in just in case anyone was interested!

Nose: The nose is interesting, starts out with a big note of sweet mint, almost like Juicy Fruit gum! There is quite a hit of alcohol – high abv? I get some soft vanilla, ripe orchard fruits, particularly red apples. There is a subtle hint of campfire smoke – but no earthy or medicinal peaty notes? A creamy, sweet maltiness and a strong mineral note – kind of like graphite. Water definitely helps this one, muting the high abv and bringing out more fruits, some peaches and the apples, and a richer vanilla. That soft smoke and the mineral aspect remaining fairly prominent. Interesting!

Taste: Quite an unexpected change from what nosing this whisky hinted at. There is a bit of an alcohol bite and adding water is almost mandatory, but with water the arrival becomes much sweeter, with more vanilla and the ripe orchard fruits becoming more vivid. I also get this strange, and surprising, Honey-glazed ham note! The smoke I picked up on the nose is now very delicate, but adding a very nice complement to the sweeter notes. The mineral note now seems more grassiness. With water this is much “bigger” on the palate – becoming nicely dense and richly creamy.

Finish:  Sweet malt and fruity, a dusting of confectioners sugar, a hint of the smoke and the minerality, with a nice, softly tannic bite at the end.

Overall: This one definitely benefits from some water and time in the glass. The water settles the alcohol sharpness and brings out the fruits and sweeter notes. It also has a very nice smokiness that is not going to frighten away new Scotch drinkers. Perhaps not the most complex or refined whisky, but still a very nice surprise.

Welcome to my Newcomers Whisky Club website. This site serves a dual purpose as a personal whisky blog where I can document my exploration of whisky and whiskey (and sometimes other liquid refreshments) and also as a site for our local whisky club....named, not surprisingly, the Newcomers Whisky Club.

With the help of my friend, Mike Dainauski, we established the Newcomers Whisky Club, Plano, TX in May 2012. We set up the club as an informal, social club comprised of whisky fans of all types, from the experienced single malt drinker, to blend drinkers seeking to try something new, to complete newbies who are excited to learn and appreciate whisky. We focus on the enjoyment and exploration of whiskies of all types in a casual and informal atmosphere.

On the personal side, I've become a whisky fan....or nutcase, as my wife would say, over the last several years and, with the help of several like-minded friends, I've been able to undertake some serious exploration of some good, some great, and some exceptional whiskies (with the odd marginal or not-so good whisky, as well). Be forewarned that I am a complete webpage building neophyte so if something doesn't work as it should, add a comment or send me an email and I will do my best to fix it!

As I go along, I hope to update the site with various whisky reviews and comments about my experiences, to document our club's activities, and occasionally share some general information pertaining to whisky in its various forms.

Welcome, enjoy, and Slainte!
On a personal note, I am a co-founder of NWC, an avowed whisky fan, and